It’s a topic that many patients are afraid to discuss: an under recognized condition known as hidradenitis suppurativa (HS). HS is a chronic disease characterized by the development of abscesses (boils) and scarring in the armpits, groin, buttocks, and under the breast. These lesions are often very painful and may produce significant drainage (pus) which may be malodorous. The severity of the disease varies depending on the individual, and HS often follows a relapsing and remitting course. Because patients as well as physicians outside the field of dermatology are frequently unaware of the disease, it is likely underdiagnosed. The disease itself – coupled with the confusion of providers they may have seen in the past – may embarrass patients, leading to lack of treatment for many years.

Various studies have suggested that approximately 1-4% of the world’s population have HS. However, as we know the disease is likely underdiagnosed, it’s likely that this number is inaccurate. HS is four times more common in females than in males; although when men do develop HS, it tends to be more severe. HS often begins after puberty with development of painful nodules in the folds of the skin (groin, buttocks, under the breast, and armpits). The armpits are the most common site of HS occurrence. As the disease progresses, nodules begin to rupture, drain, and heal repeatedly, leaving behind scar tissue. The relapsing and remitting nature of this disease leads to debilitating ropy fibrosis and sinus tracts of the skin. Although the lesions of HS frequently drain a purulent material, HS is not an infection, nor is it contagious. Most bacterial cultures of HS wounds will grow only normal skin flora – in other words, the bacteria that normally grow on human skin. However, lesions of HS may occasionally be secondarily infected. Attempts at treating HS are often frustrating. In the past, HS has been treated with topical and oral antibiotics, antiseptics, hormonal therapies, corticosteroids, and radical surgeries. In 2015, the biological medication adalimumab (Humira) was recognized as the first and only FDA-approved treatment for hidradenitis suppurativa.

What causes this disease? 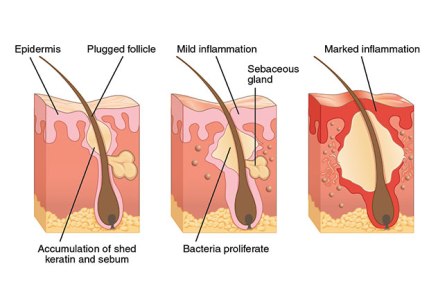 For an unknown reason, patients with hidradenitis suppurativa are predisposed to the clogging of hair follicles. In HS patients, the follicular clogging happens as a natural part of the disease process, and is not due to uncleanliness. Once the follicles have clogged significantly enough, they rupture – allowing surface skin proteins, dead cells, and other debris to be introduced deep under the skin. This foreign material results in significant inflammation, evidenced clinically by the redness of the affected area. After rupture, the body attempts to wall off follicular contents, forming an abscess under the skin. When this area finally drains and heals, a scar remains. Over time, repeated inflammation and scarring results in the formation of numerous tunnels under the skin, called sinus tracts. These sinus tracts are lined by skin cells, connecting abscesses and scarred follicles beneath the skin. Purulent drainage may occur after follicular rupture or chronically, from sinus tracts. This chronic disease, drainage, and the resulting odor is embarrassing to patients, leading to frustration, self-consciousness, and depression.

Are other diseases associated with this condition?

The short answer is “yes”. HS is associated with a group of disorders called the “follicular occlusion tetrad”; which includes, aside from HS, a severe form of acne called acne conglobata, a condition associated with the cyst formation in the scalp called dissecting cellulitis, and a recurrent, painful abscess of the gluteal cleft called a pilonidal cyst. Several other systemic diseases can be associated with HS: metabolic syndrome, obesity, polycystic ovarian syndrome, joint disease (spondyloarthropathy) and inflammatory bowel disease (Crohn’s disease and ulcerative colitis).

How is hidradenitis suppurativa severity graded?

HS is graded under a classification system known as the Hurley staging system, described in 1989. Scoring is dependent of the severity of the disease, and ranges from 1-3.  Hurley stage 1 is the mildest form of HS: no scarring is present, and disease typically responds to treatment with topical medications alone. Hurley stage 2 is classified by HS lesions with draining abscesses, moderate scars and sinus tract formation. Hurley stage 3 is the most severe form of HS. Numerous interconnected sinus tracts exist between abscesses and there is diffuse ropy scarring present.  It is estimated that nearly 60% of those with HS are classified as having Hurley stage 1 disease; whereas approximately 38% and 2% of patients have Hurley stage 2 and 3, respectively.

What are the treatment options? 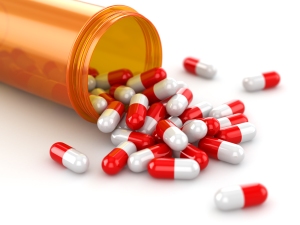 Treatment of HS varies based on severity. Because we still don’t know the cause of hidradenitis suppurativa, treatment attempts are often frustrating and disappointing. Most patients require numerous treatments over several years in order to control their disease.

It is important to note that most HS treatment recommendations are based on case reports or series, as there have been very few randomized controlled trials performed to evaluate treatment of this condition. The exceptions to this are the studies that were performed in assessing Humira’s efficacy in treating hidradenitis suppurativa.

It is imperative to treat hidradenitis early in order to prevent the development of debilitating scarring and widespread disease. Board-certified dermatologists are able to determine the severity of disease and design a treatment plan accordingly.

Patient resources: HopeforHS.org is a great resource for those suffering looking for more information and even support.